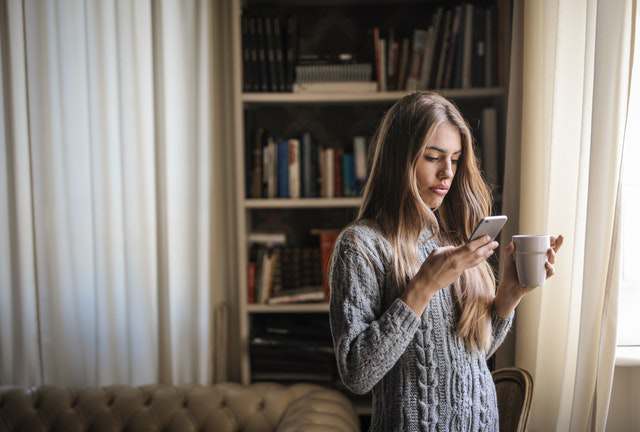 He Stopped Texting Me After We Slept Together (9 Possible Reasons)

It is a painful experience when a guy stops texting after sleeping with you. Earlier, you always saw him madly chasing you; it happened for weeks, or maybe months. He looked so thrilled to have a connection with you. It was the unbearable sexual tension and explosive chemistry that made you sleep with him.

When you don’t hear from him for a while, it feels like a wave of fresh shame & self-doubt are crashing down on you. You feel like your whole life is kind of “falling to pieces.” You may try to brush it off and tell yourself – That it was not a one-night stand; maybe he’s just busy and will get back to you soon. But unfortunately, most of the time, that doesn’t happen!

You had a good time with this guy, and he seemed like a real catch! It was disappointing when you realized he stopped responding to your texts. Here are a few possible reasons why that might happen:

After sleeping with him, you liked him so much that you wanted more of him, you found it hard to let him go, but unfortunately, he didn’t feel the same way about you.

Maybe he got confused or sleeping with you made him anxious. There is a possibility that after this intimate encounter, he became completely unsure about what he wanted from you. A more sensible and mature man would have told you all this, but this guy stopped texting you, and there is nothing much you can do about it.

2. He thought this was what both of you wanted.

Even though there are not many women like this, but there will still be a few who will not mind or will never complain that “he stopped talking to me after we slept together.”

They feel relieved that he stopped texting because this is what she also wanted.

Irrespective of how much you criticize modern dating, the truth remains that casual affairs have been a normal thing for a long time now.

There is nothing wrong for two people to sleep together for a one-night stand.

It is only wrong when one of them thinks that it will be a one-night stand while the other one has a different scenario in their mind.

It is wrong to expect your sexual partner to read your mind.

So, when he stopped texting you, it was probably because he thought it would be a one-night stand, and you were dreaming about having a relationship that was more than just sex.

3. He is scared that the relationship will now move to the next level.

It’s possible that dating a person for a while and then deciding to sleep together can be a bit of a surprise to him. He may be feeling like now you’ve taken things to the next level, making his commitment more of an issue. Maybe he is worried that the relationship has moved to a more advanced level, and now you will expect him to be more committed to you.

Sleeping with you might have made him unsure about his feelings and what he wants.

Even if they are ready, it is common for men to feel unsure or nervous about a commitment.

It is a common belief that sleeping together is more of an emotional act for women and more of a physical act for men.

It probably had nothing to do with you or your actions when he stopped texting you. He is maybe just afraid that now that he has slept with you, you expect him to be more serious about the relationship.

4. He had high expectations.

When he starts ignoring your texts, you may start feeling that there are some serious underlying issues, but sometimes answers to all our questions are not as complex as we think them to be.

Unfortunately, the answers sometimes are pretty obvious. And in this case, the reason why he is not texting is you is maybe because he didn’t enjoy spending the night with you.

For people who have been with a few lovers before, they know sexual experience is sometimes not as great as you’d expect it to be.

No one is good or bad in bed; everyone is just different. Everyone’s individual choices in bed will differ as well as their experience with each other. Physical intimacy will feel good when couples are compatible, and there is often a letdown when they aren’t.

He stopped texting you because he didn’t find you compatible enough.

Did you enjoy the experience? Was it mind-blowing or just average?

It is important to say that justifying what he did is completely wrong because no one should ditch someone because of this reason.

5. He is seeing someone else.

He will tell you so many lies to get into your pants, and as soon as you fall into his trap, he’ll start ignoring your texts.

6. He suddenly lost interest after you slept together

It is not unusual for guys to lose interest and distance themselves after getting physically intimate with you.

Every day, numerous women worldwide find themselves in this painful and humiliating situation. This often gives them a feeling that someone used them for their gain and completely forgot about them the following day.

Guys losing interest after getting into a bed with a girl is a very common occurrence.

For many men sleeping with a girl and never contacting them again is like a big achievement. They start thinking that they have become a player or a stud by doing this.

A guy who lies to you to get into your pants will often have low self-confidence and low esteem. They think they won’t ever find someone to like them using their very own character.

7. He just likes chasing hard to get women.

Many of us have this tendency to badly want something that we can’t have.

A lot of men find it thrilling to chase and convince hard to get women to sleep with them, it’s good for their ego. As soon as he gets what he wants, he loses interest in her.

8. After-Sex Conversation was a big turn-off for him.

Maybe he was freaked out because of your Conversation with him after sex. If you try to discuss the future of your relationship just after having sex with him for the first time, you may scare him off. It is not a good idea to pressure him to discuss big life decisions at this time.

To make him feel less nervous and to avoid the awkward silence, maybe you can try to say something fun or just compliment him.

9. He got emotionally attached.

Casual hookups are thrilling, but they are complicated. It is normal for women or even men to get emotionally attached to someone they slept with.

In our society, it is women who are usually considered as more needy, clingy, or emotionally dependent as compared to men. Still, the real truth is that men are also equally prone to catching feelings and post-sex emotional connections just after sleeping with someone.

He is not replying to your texts because maybe he is not mature enough to deal with these feelings.

Control your urge to have an extensive conversation with him.

If you had talked about expectations before you slept together, things could have been different. Now that he is ignoring your texts, there’s no point in trying to initiate a conversation.

It will be better to just accept the situation and move on. Pressurizing him to have a conversation with you will only make things worse as it may push him further away.

Instead of feeling frustrated, you should consider this experience as a blessing in disguise. This person was probably not the “right guy” for you, and it is best to get out of relationships with guys like these before life turns nasty.

It is important to remember that not all men are shaggers; only four to five percent will fall in this category. They only manage to go past young girls and only make it to the second date on rare occasions.

Believe in yourself; you are an amazing person.

Forget about what happened; you cannot change the past. Thinking about what went wrong is not going to bring you any good. Just remember and focus on how amazing you are.

Remember that whatever happened, it was not because of you and you are not the only girl who has gone through this. It is not worth putting so much pressure on your mind because of some other person’s fault. The truth remains that you are still a great catch. Everyone knows that you are an amazing person and have a lot to offer. It is just as important to know yourself as knowing your partner. If you always keep up with yourself, then you will never be caught off-guard when it comes to the other person in your life.

Don’t Hold back your emotions.

It is not a healthy habit to invalidate your emotions. When you suppress your feelings, you’re often left to feel unhappy, frustrated, and confused. It is not healthy for our bodies and can cause stress and anxiety. It is essential to understand that sometimes it’s okay to be sad.

No spam, notifications only about new products, updates.
PrevPreviousFeeling Like a Burden on Your Boyfriend? Read This
NextHere’s Why You Should Never Chase him When He Pulls AwayNext
On Key