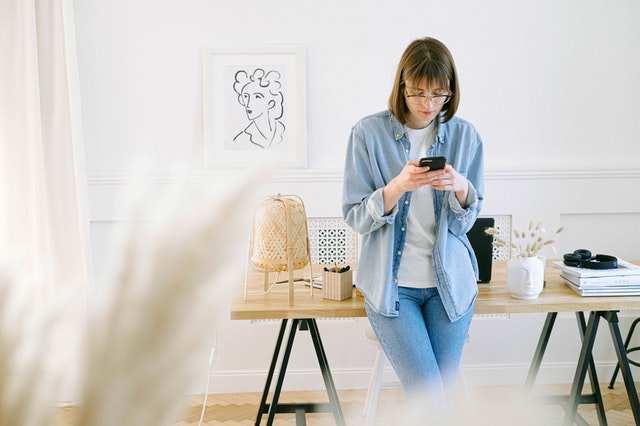 He Ghosted Me But Likes My Pictures on Social Media – What does it mean?

Things were looking really great between you two; you strongly believed that you had found ‘the one’. You found someone with whom you can have a lasting, fulfilling, and meaningful relationship. He seemed really into you, But all of a sudden, he decided to ghost you. He started ignoring your calls and stopped replying to your text messages.

And now, after a few months, suddenly, out of the blue, he is back. Whenever you upload your picture on Instagram for Facebook, he makes it a point to press the like button.

If you’re confused why he’s liking your pictures on Instagram, you must watch this video – Secret weapon To Make Him Obsess Over You

It’s so confusing when you’re trying to understand his mind. On the one hand, he’s not responding to your texts, but then at the same time, he’s commenting on your Instagram posts.

When he started ignoring your calls and messages, it clearly meant that he was not interested in you. But if he has lost interest, why does he like your photos on social media.

Below are a few possible reasons for his behavior-

1. He is Seeking Attention

When he likes all your social media posts, it mostly means that he wants to give you attention. Still, sometimes it is also an indication that the guy himself wants attention.

He wants you to be talking about him with your colleagues and close friends. Maybe he wants to know if you still have a thing for him.

Don’t get too excited, because maybe it’s not about you.

2. He Wants to Keep his Future Prospects Open

Just because he likes your new selfie, it doesn’t necessarily mean that he wants to date you. Maybe he is doing it because he wants you to keep your doors open for him if he decides to make a move at any time in the future.

3. He Wants to Know If You Have Moved On

When he constantly scans your Facebook and Instagram profiles, it indicates that he wants to know how you are doing without having to call or text you. He may be interested in knowing what you have been doing since he ghosted you. More particularly, he probably wants to know if you are dating someone.

After verifying that you are still single, he may have found it appropriate to like your photos.

Some guys  have this competitive trait where they’re constantly trying to one-up other guys. It doesn’t matter if they are dating you or not; they don’t want you to go out with anyone else.

4. He Wants to Stay in Touch With You

This is one of the top reasons he views all your stories and presses the like button on your pictures.

He could think that if he likes your post on social media, it will help him leave a better impression on you. This will in turn allow him to stay in your mind for a longer period of time.

For whatever reasons he ghosted you; he wants you to give him another chance if he decides to give another go at things.

5. He Doesn’t Want to Put In Much Effort

He doesn’t want to put much effort into building a relationship with you. This is one of the probable reasons why he ghosted you the first time. Because he is lazy, he didn’t mind leaving a bad impression by ghosting you.

Rather than making efforts to make deeper connections with you through texts, calls, and real dates, He finds it more convenient to just like your posts on social media.

6. He Wants You to Feel Grateful That he is Interested in You

Maybe he is an egoistic guy who thinks he can get back in your life as per his whims and fancies, and you’ll be endlessly grateful to him. He might even do that to show how he can still take control of you. 7. He is Missing You

When he ghosted you, Maybe he was expecting you to be sad, miserable, and drowned in self-pity.

But when he saw your super sexy selfies on social media, it made him fall for you again. He started missing those times when you two were together and were having a great time.

He pressed the like button on your posts because, it made him feel nostalgic and reminded him of the good times.

But it doesn’t necessarily mean that he is still into you and wants to see you again.

If he has any such intentions, he will do more than just liking your photos on Facebook.

8. He Doesn’t Want to Make it More Awkward

Maybe he has realized that he made a big mistake by ghosting you. By ignoring your texts, he has made things awkward between you two. He believes that if he tries to reach out again after all this, it will make things more awkward.

He’s afraid that you’re gonna ignore him if he tries to get in touch. So, rather than just texting you, he thought scrolling through your pics and pressing the like button might be a safer way to get an update on how you’re doing.

9. He is Feeling Guilty

There is a possibility that he feels guilty about Ghosting you. After seeing your happy and amazing photos on social media, he may be realizing that he lost an amazing opportunity to go out with a great woman like you.

By liking your pictures, maybe he is trying to make amends.

10. He is Looking to Have a Casual Relationship With You

It is obvious that he had a thing for you before he ghosted you. Now, after seeing your awesome and sexy photos on Instagram, he craves a casual relationship with you. Liking your photo is a way for him to get into your good books. He believes that now that he is liking your photos on social media, things will get less weird between you two.

11. It Doesn’t Mean Anything

Maybe this guy has a habit of liking every post that comes up on his feed. To verify this, you can check his friends’ profiles to see if he likes all their photos as well.

Likes your photos on social media can mean a lot of things, it doesn’t necessarily mean anything serious.

It is the dating term for someone who ghosted you but continues to like your photos on social media and watches all your reels and stories.

It is a very confusing situation because when someone is orbiting you, it means they had the opportunity to go out on a date with you earlier, but they chose to ignore you.

How to Deal With an Orbiter?

If you are getting bothered by what he is doing, just block him. He ghosted you, and he doesn’t deserve a reason why you blocked him.

You can also ignore and let him do whatever he is doing.

Or you can confront him by sending a DM (just say “Hi”) whenever he likes your photo or views a story you posted.

No spam, notifications only about new products, updates.
PrevPreviousI Acted Crazy And Pushed Him Away – 10 Tips on How to Fix The Situation
NextBoyfriend Tells Me What I Can and Can’t Wear – What To Do?Next
On Key