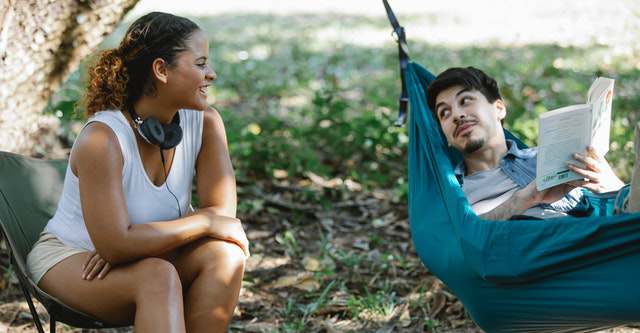 It’s fun to have an expressive partner, but it can be overbearing, irritating, and frustrating if he talks too much. Relationships succeed when a couple bonds and connects with each other despite their numerous flaws.

When your partner feels comfortable opening up and being vulnerable around you, it can be a liberating experience. It is a sign that your relationship has reached an advanced stage.

Vulnerability helps you to form a closer, deeper and more authentic bond with your partner. It breaks down walls between a couple and drastically reduces the chances of miscommunication and misunderstandings.

Many times it works like therapy in the relationship. This is especially in cases when you always have a lot to say (or vent) to your significant other. But like every other thing in life, if there is no balance, it can make things go off track for you. If your boyfriend talks too much, living with him can be a very frustrating experience. Sooner or later, he will drive you crazy and will make it difficult for you to connect with him at a deeper level.

You always fear that if you bring up this issue with him, he is not going to take it sportingly. There is also a chance that you might hurt his feelings. If both of you are at a very good place in your relationship, saying something unsavory can have a negative effect on your relationship with him.

But, it is also important to note that he will feel even worse if someone at work or a stranger points it out to him. It’s best if it comes from you or his close family members. Maybe he’ll get upset with you for hurting his feelings, but if your intentions are right, sooner or later, he will understand that you want the best for him.

When speaking with him regarding this issue, you have to make sure that you approach this situation with more maturity. You have to find a way to convey what you have to say without making him feel hurt. You have to understand it’s very difficult (sometimes impossible) to change people. But, if he genuinely loves and cares for you, he will listen to you.

Make sure to be polite with him and tell him the various disadvantages of talking too much. Tell him that other people stop respecting those who talk a lot. Explain to him how dignified it looks when one actively listens and says less.

Maybe you’ll be able to improve his behavior, and maybe he won’t change, but you must try.

Lesser the details, the shorter will be the conversation. Focus on speaking less on topics which you think will encourage him to talk more. When he is talking to you, try to keep your responses apt and short. If you give lengthy responses, it will give him more material to speak on. If you want him to talk less, then try not to say things which can divert the conversation to a fresh topic. While doing all this, you have to make sure that you do not sound uninterested to him. It is all about maintaining the right balance. When you are uninterested in what he is saying, he may think that you are not interested in him. This is the reason why you need to handle this issue very carefully.

He talks too much because he wants to share with you things that he knows. Maybe he wants to prove a point. Listening to a person who speaks too much can be hard and draining. But, sometimes listening can be very beneficial for you. Maybe he is saying something that you need to know.

When he speaks a lot, it could be because he is seeking your praise. Maybe he wants you to praise him for his knowledge.

If you use your body language correctly, it can help you deal effectively with this situation. For example, when he is talking with you, you can reply with a nod instead of adding to the conversation. Or, you can use certain body language gestures ( or eye contact) to let him know that you agree with whatever he is saying. You can also use your body language to praise him and make him feel special.

When you do not add to the conversation, he’ll feel less encouraged to talk so much.

4. Keep Him Engaged in other Activities

This way, you will not be required to pretend that you are listening to him. Your sole intention should be to distract him with something so that he stops talking. For example – you can tell him that you need his help with something (or you need him to take care of something).

When your boyfriend talks too much, it could be because he wants to feel heard and understood. When you show him some empathy and make him feel heard, he will probably stop talking so much. 6. Find Out If He is Like This With Everyone or Just With You

If he behaves like this with everyone, maybe he needs some professional help from a psychologist. People may start to distance themselves if things continue like this. It’s not uncommon for people to avoid someone who can’t stop talking. It will become hard for him to bond with his friends and people at work.

Why is it Important to Look at This Issue From a Broader Perspective?

Every relationship starts with the ‘falling in love stage’. During this time, your boyfriend becomes the centre of your life. You are so deeply in love with him that you ignore all his flaws. You see his faults, but they don’t matter to you that much at this stage.

Maybe he has poor hygiene, maybe he talks too much, or he may have a habit of staying out late, but it’s all okay for you. During this stage, the euphoric feeling of love outweighs all the negative stuff.

But, once this period is over and your relationship reaches an advanced stage, you start focusing on your partner’s flaws. Things that didn’t matter to you earlier now become a matter of concern for you. The excitement and euphoria of initial relationship days start to settle down, and suddenly the negatives start to outweigh the positives.

No individual is perfect, and no relationship is perfect. Every couple goes through their own highs and lows. If you want your relationship to succeed, you’ll have to stop focusing on the negatives. Focus more on the positive things that are happening between the two of you.

People talk too much because of two possible reasons –

– They want approval and validation from others. It makes them feel better about themselves.

– They want to improve their connection with you and strengthen the bond. When they don’t stop talking, it is sometimes a sign that they want to be closer to you.

Maybe by talking so much, he is trying to express his love for you. If you think that this is a guy with whom you can have a happy, meaningful and lasting relationship, then you must always try to make him feel better about himself.

If you want to improve your relationship experience with him, rather than forcing him to change his habits, you must try to accept his strengths and weaknesses.

No spam, notifications only about new products, updates.
PrevPreviousMy Boyfriend Spoiled His Ex But Not Me
NextMy Boyfriend Prioritizes Friends Over Me (What to do?)Next
On Key