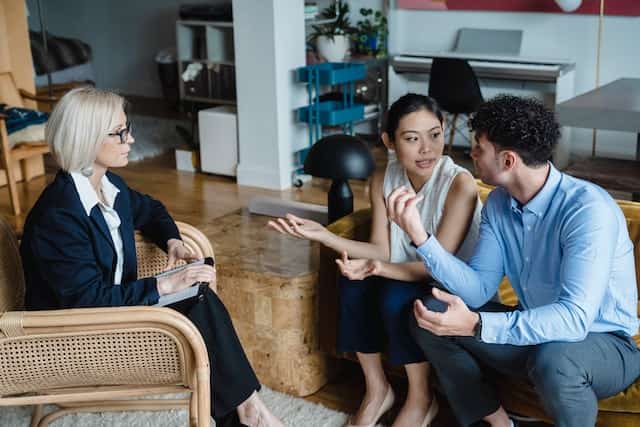 My Boyfriend Tells His Mom About Our Fights

Relationships succeed when a couple acts as a united front. But when your boyfriend starts acting as a mamma’s boy it can create a lot of disturbances in your relationship.

Seeing your partner telling every small detail about your fights and arguments to his mother can be an uncomfortable experience. Not only does it impacts your connection with his mother, but it can also make you have second thoughts about your relationship with him.

It is not a sign of a healthy relationship. When you are together, some things are meant to be private.

Suppose you’ve already asked him to stop talking with his parents about your relationship at length, and he’s still doing it even after being warned. In that case, this is a sign that things aren’t going so well.

One of our readers wrote-

“My husband is constantly telling everything that happens between us to his mother. He insists that I open up with him, and when I do, he shares all the details with his mom so she can judge me.”

Your boyfriend running to his mommy and telling her every minute detail about the relationship is a big privacy concern. In the long run, it will act as a barrier that will stop you from opening up with him. And if you don’t open up, it will be difficult for you to form a deep connection with him.

When your boyfriend talks to his mom about everything you two discuss, it is natural for you to feel a sense of disrespect. This is a deal-breaker for many women. How to Deal with This Situation?

Try to figure out things that you can tolerate and things that are completely unacceptable to you. Sit with him and set healthy boundaries. Let him know how important it is for him to follow these boundaries.

Discuss with him how him telling every minute detail about the relationship to his mom is creating big privacy concerns for you. Let him know how his behavior is affecting your relationship with his mother.

You must control your temptation to blame him or his mother for the problems in your relationship. Be patient and focus on conveying your concerns to him and finding a solution to current problems.

Your boyfriend has a very close bond with his mother; it will not be in your good interest to create an issue about this. As mentioned above, just focus on conveying your concerns and setting healthy boundaries.

He needs to know that you cannot be taken for granted. If he continues to be selfish and disrespectful towards you, he must know that you will end this relationship.

2. Encourage Him To Be More Responsible

When you are in a relationship with a mama’s boy, he is more likely to depend on his mother for various aspects of his life. If you want to bring change in him, you’ll have to encourage him to be more responsible.

Tell him to start taking responsibility for more things like his finances, doctor’s appointments, and social and professional life. The key here is to not blame him for being a mama’s boy. Focus on encouraging him to be more responsible and independent in his life.

3. Have Realistic Expectations From Him

When you see your boyfriend telling his mom details about your last fight with him, it indicates that he shares a very close bond with his mother. It is also a sign that his mother will always come first for him. So when you blame him for being a mamma’s boy, expect him to be defensive.

Rather than arguing with him, it will be in your best interest to act a bit supportive of him. Explain to him why his behavior is making things difficult for you.

You can start by saying – “when you share every little detail with your mom, not only does it get on my nerves, but it raises many privacy concerns for me too. I feel discouraged to open up with you.”

4. Focus On Improving Your Connection With Him

He acts like a mamma boy because he feels closer and more comfortable with his mother. It also implies that his connection/attachment with you is not as strong as it should be.

Find out ways to improve your emotional and physical intimacy with him. Make him feel heard, loved, accepted, and understood in this relationship.

If your partner shares a good level of emotional intimacy with you, they’ll value and care about your happiness. He will better understand your concerns and will stay away from doing things that cause hurt and pain to you.

5. Think Twice Before Opening Up With Him

When you know he will repeat every word you say to his mom, you should make sure to not speak anything you don’t want her to know. When he shares every small detail with his mom, it will affect how his mom sees you.

There is a chance that your relationship with his mom will get damaged beyond repair. Therefore until you fix this situation, it will be in your good interest to have a little control over what you say during disagreements and fights.

6. Get To The Core Of The Issue

Maybe he has a very good relationship with his mom, but this is probably not the only reason he confides in her. Maybe he’s feeling hurt by something you said to him. Maybe he has fallen out of love with you. There could be many reasons behind this; some of them are –

– He thinks you do not care about him, You do not love him as much as he does,You do not understand him

– You both fight a lot

– He doesn’t trust you

– There is a lack of communication between the two of you

– You don’t treat him as an equal in this relationship

– You are overly close to your mother 7. Do Not Over Stress

It is natural to feel worried when you know that things will never be right between you and your boyfriend’s mother. Rather than stressing about this issue, Focus more on finding a solution to this problem. Stop seeking your boyfriend’s or his mother’s approval; you do not need it.

8. Encourage Him To Open Up With You

Try to regain his trust and encourage him to open up with you. Rather than acting defensively, try to come across as supportive of his concerns. Work as a team to find solutions to these problems.

If you think he genuinely loves and cares for you, try your best to make peace with him. It is easy to blame him for all the mess in your relationship. But, all it is going to do is make him act more defensively and create more resentment between the two of you.

9. Think Twice Before Moving in With Him At His Mother’s House

If you know that he is a mamma’s boy, it will be a terrible idea for you to move into his mother’s house. There are strong chances that he will value his relationship with his mother more than he values you.

To avoid upsetting his mother, he will always choose to take her side whenever the two of you are having a disagreement.

If you Are going through financial troubles and his parents have offered you to live with them, think twice before accepting their offer. Even if you accept to move in with them, make sure it is for a shorter period.

Not living with his parents does not guarantee that you will have a perfect relationship with your boyfriend. Still, the distance will make things less stressful.

10. Control Your Temptation To Confront With This Mother

It will be a terrible idea for you to confront his mother and tell her to back off. The only right thing for you to do in a situation like this is to sit with your partner and tell him how his behavior is negatively affecting you.

Work with him as a team to find a solution that works for both of you. Tell him that you have no problem with his closeness to his mother. But, simultaneously, you want him to give more importance to your privacy.

No spam, notifications only about new products, updates.
PrevPreviousWhat To DO If My Boyfriend’s Mom Is Too Involved In Your Relationship?
NextMy In-Laws Treat Me Like An Outsider – What To Do About It?Next
On Key