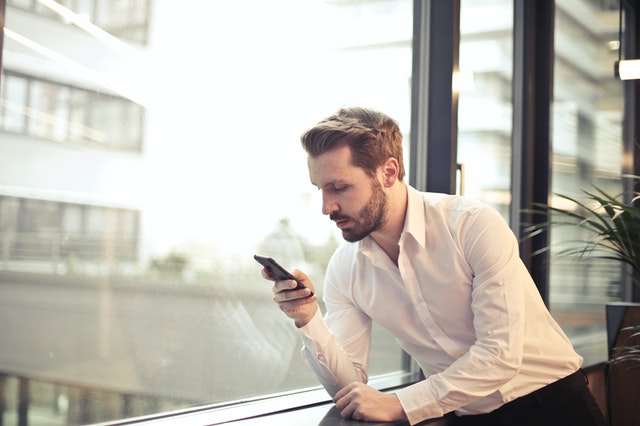 Why is My Boyfriend So Protective Over His Phone?

It is natural to feel frustrated when your man is very protective over his phone.

It will seem like he’s being secretive and hiding things from you- the more he does that, the more you’ll be suspicious about him being honest.

When a man is very overprotective with his phone, it doesn’t necessarily mean that he is cheating on you.

But at the same time, experts seriously believe that a man hiding his phone is a serious Red flag in relationships.

When he spends a lot of time on the phone and is always trying to hide it from you, there is probably something there that he doesn’t want you to know.

Even if there is no infidelity, it is still a sign that your relationship is not as healthy as it should be.

Having a healthy and lasting relationship is all about two people sharing everything together, even their deepest secrets. When you love someone, you don’t lie or hide things from them.

What does it mean when your boyfriend is so protective over his phone?

1. He is Cheating On You

When he doesn’t let you near his phone, it’s usually because he is cheating.

As soon as you get near his phone, it will get him in an alert mode. He will try his best to stop you from checking his phone.

If you think he is cheating on you, it’s natural to want to take a look at his phone. But, it’s important to be 100% sure before taking any big step because a guy probably won’t take kindly to someone snooping around in his phone – even if they’re doing it with the best of intentions.

When he is not letting you see his phone, it could be because he is texting a friend you don’t like.

Maybe that friend is a bad influence, someone who tried to spread wrong rumors about you in past or a friend who stopped your boyfriend from getting into a relationship with you. Your man doesn’t want you to know that he is texting this guy, so he tries to hide his phone’s screen whenever you are close to him.

There are two ways to look at this situation –

(i) He is trying to avoid an argument with you

(ii) Or, you can see it as an act of disrespect towards you because he has no regard for your feelings.

Maybe he doesn’t want you to see his phone because he is sexting with another girl. It is believed that sexting is even worse than cheating because apart from being sexual, it also involves an element of emotional infidelity.

Sexting other girls is cheating. There’s always the chance that there won’t be any physical contact between your guy and her, but when he builds an intimate relationship over text with someone else, that’s cheating.

Sexting can convert into a real full-time affair within no time. In fact, it is a platform to start an affair. When a guy gets too involved in texting, they often feel inclined to commit more time and emotion to this other woman.

4. He is Doing Some Office Work On His Phone

Smartphones are very useful nowadays, and you can do pretty much anything with them. If you’re tech-savvy, you’ll be able to use your smartphone as a tool to complete most of your work remotely.

When he is not letting you see his phone, it may be because he is busy doing his work.

He thinks that if you start seeing what he is doing on his phone, it might cause an interruption and make him lose his focus.

Doing office work on the phone is trickier than doing it on a computer. For instance, having a zoom call with a lot of people or managing a complicated spreadsheet on a smartphone requires more focus than it does on a laptop or computer.

You may think that he is making an excuse, but it doesn’t matter how stupid it sounds – sometimes, this is why he is hiding his phone from you.

5. He is Fighting With Someone Over Text

Maybe he is having an intense fight with someone over texts, and he is not very comfortable telling you about all this. It may also mean that he has a dark side that he is hiding from you.

Maybe some heated exchanges are happening between the two of them, and he is hiding his phone because he doesn’t want you to see him acting that way. There’s also a chance that he is posting his political views on the Facebook or Twitter. He might not be comfortable letting you see the horrible things he is writing while making a political argument online.

6. He is Too Embarrassed to Show What He is Doing On His Phone

– He is doing a google search regarding some spiritual topics. Maybe he is too shy to show it to you because you may find it bizarre.

– He is playing a silly game that usually 5-year-olds play.

– Maybe he is not doing that great emotionally. He Is having an intense conversation about his state of mind with a close friend. He is too embarrassed to tell you about this conversation.

– He is having a conversation about you with his friend or a close family member.

7. He is Disappointed With You

When he is mad at you and doesn’t want to talk, he can use his phone as a place of refuge.

To avoid a confrontation with you, he is trying to show that he is busy with his phone.

If you guy is overprotective with his phone, does it mean that he is cheating on you?

Well, as mentioned above, it doesn’t necessarily mean that he is cheating on you, but there is a strong possibility that he is.

He Keeps His Phone Face Down

It would not be a big deal if it happened just once or twice because sometimes people do it unconsciously.

But if you think that your partner deliberately keeps his phone face down, it indicates he is trying to hide something from you.

When you are in a relationship with someone, there comes a stage when you stop feeling uncomfortable sharing your phone’s password with your significant other.

But, it is puzzling when you know his phone’s password, and suddenly he decides to change it without any logical reason.

When this happens, it is natural for you to feel that he is trying to hide something from you.

He Gets Angry When You Try to Touch His Phone

He is so territorial about his phone that he gets annoyed whenever you try to touch it.

When your man makes it a point to keep his phone off-limits from you, it is a strong indication that he wants to hide something from you.

He is Secretive About His Texts

When you go out with him, you’ll notice that he is always texting someone else. When you ask who it is, he tells you it’s his friend or one of his coworkers. It feels like he wants to keep the person a secret from you.

He’s Always on Phone But Never Replies To your Texts

It is natural for you to feel angry when this happens. When he is with you, his eyes are always glued to his phone. But when you send him a text, either he doesn’t reply or take hours to text back.

It makes you feel that you are no more a priority in his life.

He always likes it when you post pictures of you and him on Facebook and Instagram. Now, all of a sudden, he wants to stop you from doing that. It is important for you to figure out why he is demanding this change. Some people don’t like to share their personal life on social media. But if that is the case, they’ll probably mention it early on, so you’ll know.

Suddenly asking you to stop posting these pictures can make you feel like they don’t want to be seen with you.

He Deletes His Call Logs

A guy who is cheating with you will sometimes allow you to use his phone. This is because he always makes sure to delete all his call history and messages.

Guys do it because they know that it is difficult to be careful all the time.

If you catch him getting frequent calls from a particular unknown number, it is can be a signal that something is fishy.

Confront him about whose number it is; if he gets so many calls and messages from this number, why hasn’t he saved it yet.

He Avoids Answering Calls In Front of You

If he is cheating on you, he will avoid answering calls around you. Sometimes when he has to stay in the room, he’ll start whispering on the call so that you can’t hear what’s being said.

When your relationship is healthy and meaningful, there will be no secrets between you two. Your guy will never hesitate to take personal/professional calls in front of you.

He Avoids Accessing his WhatsApp on Email in Front of You

When he gets a notification for a text message or email on his phone, rather than reading it, he’ll keep the phone back in his pocket or put it face down. It shows that he doesn’t want to read his texts in front of you.

If you found some strange names in his phone’s contact list, you should ask him about it.

It will be wrong to jump to any conclusion without giving him an opportunity to explain. There is a strong chance that these are just his friends or office colleagues.

If you do not find his replies very convincing, you can check these contacts yourself.

No spam, notifications only about new products, updates.
PrevPreviousWill a Man Change For a Woman He Loves?
NextHow To Tell Someone You’re Done Trying? 11 Big Reasons Why It’s Time To say I am DoneNext
On Key