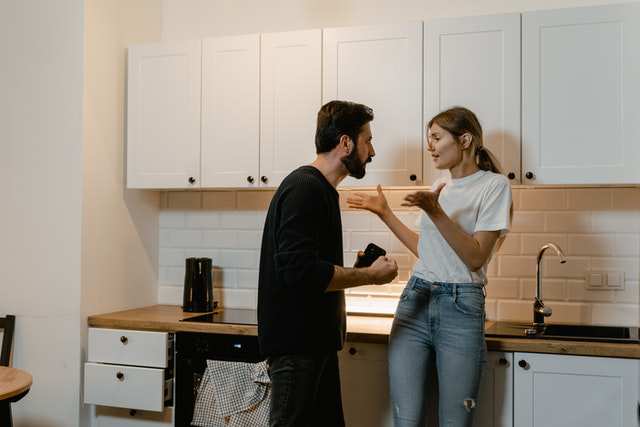 What Does it Mean When a Man Feels Inadequate in a Relationship?

It can be a frustrating experience to live with a man who feels inadequate in the relationship. Apart from draining you emotionally, it can prevent you from having a meaningful and fulfilling relationship with him.

When a guy goes through a feeling of inadequacy, he’ll hate himself. Even if everything seems perfect in the relationship, he’ll try to run away from you because he feels unworthy of your love.

The feeling of inadequacy in a relationship is sometimes very easy to explain but very difficult to understand. A person who feels inadequate in a relationship will feel shameful, guilty, and embarrassed for who he is. The feeling that you are damaged and flawed beyond repair kills their confidence and self-esteem.

When you encourage him to open up about these issues, he’ll not admit it and may even become defensive. But, in the back of his mind, he is always wishing to be someone else.

A man who feels inadequate will often make mistakes. When he feels less about himself and lacks confidence and self-esteem, he is likely to be reckless and careless. The feeling of inadequacy and strong desire to be someone different makes him feel anxious and panicked all the time.

Men who are going through something like this may feel encouraged to take up unhealthy stuff like – gambling, exotic traveling, wasting money buying things they don’t need, irresponsible sex, starting a new business without any plan, etc.

He feels threatened that his partner is going to leave him and he’ll be left alone. When they make poor decisions, it further impacts their confidence and self-esteem. Instead of accepting the situation, they try to run away from these feelings.

There are many reasons why a man may feel inadequate in a relationship; some of them are –

– When he’s insecure about the fact that you have achieved more in your life than him.

– His last girlfriend cheated on him

– He’s worried about his Sexual Performance

– When you spend a lot of time with your male friends

What makes men feel inadequate in a relationship?

When your boyfriend or husband feels inadequate, it will have a deep impact on the future of your relationship. Every guy will react to these feelings in their own way. Some may shut themselves and completely hide, while others may try to seek experiences to overcome their pain.

If you genuinely love and care for him, you must help him get through this situation. Rather than giving up on him, you must encourage him to open up about these issues.

If you think your man feels inadequate in the relationship, below are a few important things that you must remember-

1. He Feels Unworthy of Your Love

In the initial stage of the relationship, he treated you like a cherished prize. He wanted the world to know that you’re with him now.

The initial infatuation phase of your relationship was intense and intoxicating for him. But, when your relationship grew out of that phase, all the excitement started to fade away. Without this excitement, he started feeling ‘not ok’ and inadequate about himself. This feeling of inadequacy started consuming his mind.

When a guy is going through something like this, it becomes difficult for him to see things clearly. Even if everything is going really well in the relationship, he’ll start to feel that he’s not worthy enough.

The lack of confidence and self-esteem makes him believe that he just got lucky and fooled you into getting into a relationship with him. He thinks that he’ll be able to love himself only when he proves that he’s capable and worthy enough for you. He needs to know that there’s nothing wrong with him. You need to help him get over the feeling that he is inadequate for this relationship. Let him know how much you love and care for him. Tell him how great a man he is and how you feel lucky to have him as your partner. When you tell him about the things you like about him, it’ll help him overcome his depressing and negative thoughts.

2. He Feels a Constant Need To Prove Himself To Others

By doing this, he thinks he’ll be able to distract himself from the negative voices in his head. The voice inside his head that tells him he’s not good enough for this relationship. He wants others to believe that he’s worthy of the life he’s living.

He doesn’t want to lose you. By dreaming big and proving himself in front of others, he’s giving himself hope that one day he will be able to love himself for what he is.

Feeling the drive to do grand things in life is actually a good thing. But why does he have so many desires? Sometimes asking ourselves why we want to achieve so many things in life can help us get more clarity about things. It can help us in living a more purposeful and fulfilling life.

To help him feel better about life, encourage him to start living in the present. Tell him to stop worrying about the past and stop fearing about the future. There is so much to live right now in this very moment.

Make efforts to improve the physical and emotional intimacy between the two of you. Make him feel loved, appreciated, and accepted. Let him know that you love him for what he is right now. Tell him he is not inadequate but enough for you. Focus on helping him to stop worrying and re-aligning his priorities and motivations.

3. He Loves You a Lot But Hates Himself

The feeling of inadequacy has made him so emotionally drained that he only sees his flaws. Maybe this is a perfect relationship that can be meaningful and fulfilling for both of you, but he fails to see it. He is always panicked and anxious, wanting to be someone he loves.

From the inside, he is always struggling to love himself. This is stopping him from putting more effort into this relationship. If he continues to live his life in this state of mind, it can be fatal for the relationship as well as for him. Maybe he has the potential to achieve a lot in his life, but the feeling of inadequacy will never let him achieve anything meaningful. If you truly love him, help him love himself. Maybe you can get him to meet a professional therapist.

4. He Craves Attention From People Outside the Relationship

When he feels inadequate, he may seek attention from others outside the relationship. Sometimes he may also feel encouraged to take up activities without you.

It can be a very painful feeling to see your guy trying to get attention from someone outside the relationship; it’s like they’re trying to start seeing someone new while they’re still in an exclusive commitment with you.

Maybe his low-self esteem or feeling of inadequacy is making him do this. Sometimes committed men get an ego boost when they get attention from women outside their relationship.

When you are going through a phase in your life where your self-esteem is at its lowest, it’s easy to get addicted to some unhealthy habits. For instance – Men in a situation like this often get addicted to getting approval and validation from other women.

Getting compliments from other women makes him feel great about himself. His messed-up mind has made him crazy for approval, validation, and attention. If you look at it from a broader perspective, you’ll understand that all he’s looking for is some evidence to prove that he’s worthy enough. He thinks that if other women tell him that he’s awesome, it must mean something.

You may think that it’s obvious for all of us to love and feel great about ourselves. But for someone who is going through a feeling of inadequacy, this is easier said than done.

5. He Struggles to Live in The Moment

Because there are a lot of struggles going on inside his head, he fails to live in the moment. He is either worried about the past or fearful about the future. The feeling of inadequacy stops him from enjoying the moment.

6. He is Jealous of Other Men in Your Life

He wants that he should be the most important man in your life. And when he doesn’t see that happening, it makes him feel threatened.

No spam, notifications only about new products, updates.
PrevPreviousWhy Do I Feel Guilty after Doing Things With My Boyfriend?
NextSeeing My Ex With Someone Kills Me – How to Deal With This Situation?Next
On Key