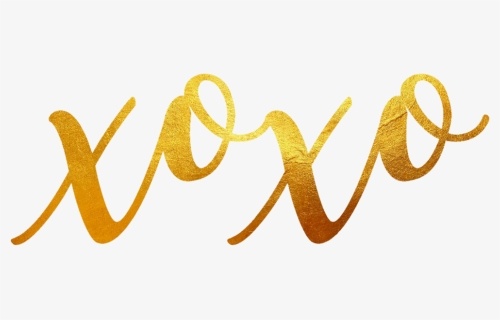 What Does XOXO Mean? Where Did it Originate?

Most of us are familiar with the term XOXO; it is commonly used when writing letters, signing cards or sending a sweet message to loved ones. The term XOXO is universally seen as a sign of expression of love and affection. Many of us wonder who invented this word, where it came from?

XOXO is not a dictionary word; it refers to kisses and hugs. It is usually written at the beginning or end of a sentence. Though this phrase is a symbol of affection, it should not be considered a representation of passionate love that is to be exclusively used by a romantic partner. XOXO is, in fact, just a lighthearted way of expressing affection to your close friends and family members. But the question is why these unspectacular letters are used to represent kisses and hugs. It is a common belief that the letter X looks like a stylish representation of two people kissing, and the letter O resembles the arms of two people coming together to form a hug. While this explanation might make sense to some, many people believe that the actual reasoning behind using the word XOXO is most likely related to religious history.

There is no documented evidence about this phrase. Still, Historians believe that because many people in the middle ages did not know how to read or write, they used the letter X to sign important documents. They commonly used it because it was easy for everyone to draw, and it also resembled the Christian cross. After putting the X mark on the document, the signee would kiss it to demonstrate truthfulness, sincerity and honesty. It is something similar to taking a sworn oath.

Another popular theory relating the roots of XOXO to Christianity is that because the letter X has visual similarity to the Christian cross, it was perceived as a sign of goodwill. Because people used to see the symbol X in medieval churches, they believed it meant Christ.

Historians also believe that the letters “X” and “O” have been linked together for a long time; two major reasons for this belief are-
-Both these letters are easy to write for everyone, even for people who can’t read and write.
-The tic-tac-toe game (believed to be invented in medieval times) used both these signs (“x”, “o”), Historians are not sure about how the symbol X used by Christians and symbol O used by Jews became “XOXO”. The letter “X” was initially seen as a symbol of “Christ”; however, people started conceiving it as a symbol of a kiss with time. This transition depicts a change to a new culture that places more emphasis on love.

The first documented instance of the word “XOXO” was found in 1960. People started putting together the symbols X and O at some point in history, which became a popular phrase used by millions of people today.

In the past few years, the usage of the phrase XOXO has increased so much that there are now multiple variations of this word. There are multiple styles and substitutes of these words used by people when sending a message, e-mail or when writing a letter.

XOXO: When we use twos Xs and Os, we intend to send a lot of hugs and kisses to the receiver of our message. Earlier, people used this phrase only for their romantic partners, but nowadays, it is like a lighthearted way of expressing love to your friends and relatives.

XO: In comparison, XO refers to a single kiss and a hug. It is a quicker way of expressing affection to your close ones. Both “XO” and “XOXO” are commonly used to express the same thing – sincerity, trust, love and friendship.
Cutting “XOXO” in half will mean the same thing. It is just a mini form of the exact phrase. The smaller version, “XO”, is commonly used while sending texts to your beau, friends or close family member.

X: Using this letter at the end of your message signals to the other person that you are sending a kiss. It can mean a romantic kiss or a customary kiss on a cheek that you give to your loved ones to greet them. Compared to other languages, the English language is very open to adding new words and phrases to its dictionary. There have been many examples in past when words from a different language (or culture) are added to normal sentences, leaving many unaware people confused. The phrase XOXO is one such example.
When using this word, you have to be entirely sure that you are using it with the right person in the right situation. One important thing to note is that it is a casual phrase, and you should avoid using it in formal conversations.
Below are few examples of casual sentences where the phrase XOXO is commonly used-

Let’s meet tomorrow. Xoxo
Lots of love, DAD. Xoxo
I love you. Xoxo
I hope you’re doing great! Xoxo
It was so thoughtful of you! Xoxo
You know you can’t live without me. xoxo
XOXO Paula. “How was the interview?”
Thanks a lot. xoxo.
Xoxo. Well done!; You really stood up for yourself.
I would be highly obliged. xoxo
I love what you did with my hair, Sheila. xoxo
I am happy so happy I selected this dress for the wedding. xoxo

It’s not that the phrase “XOXO” is used only to express affection or shower your loved ones with lots of hugs and kisses. It is believed that in medieval times when soldiers wrote a letter to their loved ones, they ended with the acronym SWAK, which means “Sealed with a kiss”. In modern times, due to the growing popularity of emojis, the word “XOXO” has been falling.

“XOXO” is a positive and impactful phrase with deep-rooted meaning, and its usage is prevalent in numerous traditions. The millennials and people from later generations prefer to used actual phrases and alphabets instead of emojis and GIFS to express themselves on messaging platforms. This is why even after the tremendous popularity of emojis, the word “XOXO” is still used widely every day by millions of people worldwide.

No spam, notifications only about new products, updates.
PrevPreviousHow to End a First Date the Right Way
Next12 Obvious Signs He Wants to Marry YouNext
On Key